A Deep Dive into BLE Packets and Events 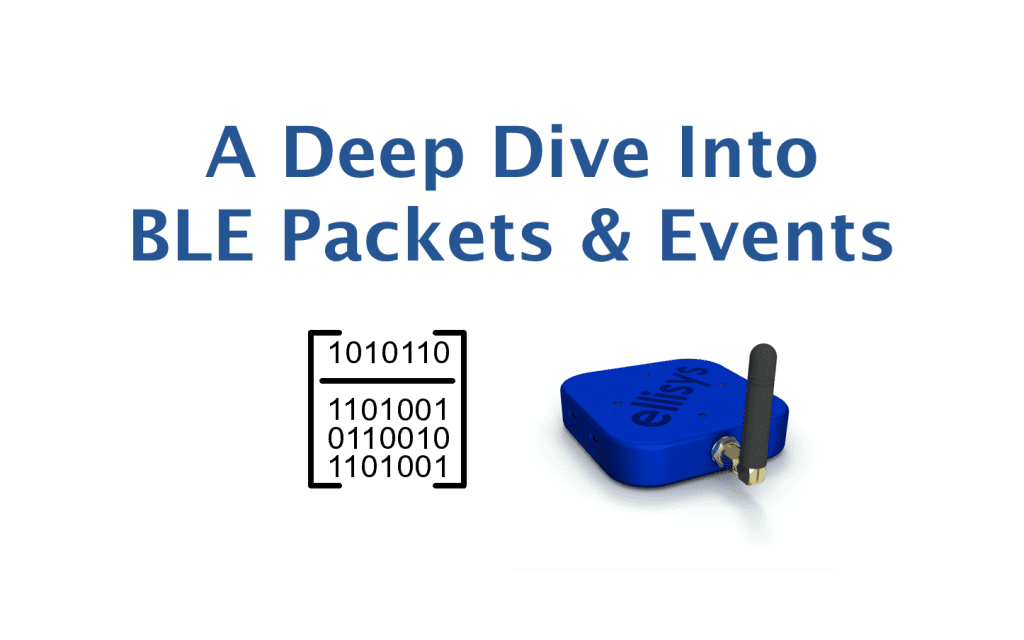 In BLE, there are many events and operations that can be exchanged between a Peripheral and a Central. Understanding these events is imperative for any BLE developer, and there are two aspects to achieving this:

I believe these two methods go hand in hand in helping achieve a full understanding of BLE.

We cover the first aspect in my Intro to Bluetooth Low Energy book (which you can download for free here or purchase in paperback format).

In this post, we will go through a number of events and better understand them by analyzing captures from a Bluetooth sniffer (Ellisys Bluetooth Tracker).

Here’s a list of events/operations we’ll be looking at:

In this section, we’ll take a look at a couple of different advertisement packet types including:

For each of these types, we’ll look at:

Before we get into specific examples, let’s first look at the format of an Uncoded (1M PHY, 2M PHY) Advertisement packet (figure taken from the Bluetooth 5.1 specification document):

You’ll notice that there are two main parts in the PDU: Header and Payload.

Let’s take a look at a nonconnectable scannable advertisement from a BLE sniffer capture:

Here are the details as shown by the sniffer software. The first screen capture shows the details of the Link Layer information:

A few notes about the above fields:

The remaining details show the contents of the Link Layer packet itself. I’ve gone ahead and highlighted the most important fields:

A few notes about the fields in the capture:

Advertisement type (PDU): ADV_SCAN_IND. This refers to the nonconnectable scannable undirected advertisement type. The value in Hex is shown to the right: 0x6 and is defined in the official specification:

Let’s take a look at how the raw data maps to the values listed in the Details screenshot.

Payload
The payload for an ADV_SCAN_IND packet is defined in the specification as:

This follows the well-known LTV (length-type-value) format. In our example, we have the following fields:

Now, let’s look at what each of these fields represents.

To do this, we need to refer to:

From these references, we can now analyze the fields:

The last bytes are the CRC of the Payload:

Now, let’s look at another type of advertisement packet: a connectable scannable undirected advertisement. We won’t go into the details as we did for the previous advertisement type example.

In this example, we notice a lot of similarities to the previous example. All we changed is the type of advertisement.

Here are the details of the selected packet:

One of the most important packets in BLE is the Connection Request packet. It’s the packet that the Central sends to an advertising Peripheral (sending a connectable advertising packet) to initiate a connection.

This packet type is very important because of the crucial information it contains (which the Central needs to convey to the Peripheral).

Let’s take a look at the contents of a connection request packet (taken from the official Bluetooth specification document):

The important information is contained in the LLData part of the packet:

Here’s an example of a connection request packet as captured by the Ellisys Bluetooth Tracker sniffer:

And here are the details of the packet:

Let’s look at the raw data and see how it maps to these details:

Keep in mind that the data displayed here is LSB to MSB (as it is received at the receiver, from left to right).

That’s it. Now you know about every single bit in a connection request packet!

Once two BLE devices are connected, they go through a few operations and data packet exchanges that are necessary before any user-initiated data is exchanged between the two.

Let’s look at the following operations:

This packet gets sent from each of the devices to inform the peer of the Bluetooth version used and the manufacturer of the chipset.

Let’s take a look at the packets being exchanged in the following example (iPhone Xs MAX <–> Nordic nRF52840 DK):

As you can see, the packet is sent from each of the devices. Each contains four fields:

Following is what is sent by each of the devices (first being the iPhone, and second being the Nordic DK):

Since not all features within a Bluetooth specification version are mandatory (some are optional), the devices need to communicate to each other what specific features are indeed supported.

This is done via the Feature Exchange packet.

As of version 5.1 of the Bluetooth specification, there are 28 defined bits that indicate whether a feature is supported or not.

Let’s take a look at the list of features supported by each of the devices in our example.

First, let’s define what MTU is:

MTU stands for Maximum Transfer Unit and it defines the maximum amount of data that can be handled by the transmitter and receiver and which they can hold in their buffers.

There is no limit per the spec on how high the MTU value can be, but the specific stack in use may have its own limitations.

The effective MTU gets determined by the minimum value of ATT MTU that the client and server support.

Exchange MTU packet sent by the iPhone, with an MTU value of 293 bytes:

Exchange MTU packet sent by the Nordic Dev Kit, with an MTU value of 23:

The Attribute discovery process happens whenever two devices connect to each the first time.

After that, the client may cache all attributes (including services, characteristics, descriptors, etc.) to avoid performing the discovery process the next time the two devices connect.

If a client does not cache the attributes, then it must perform the discovery process each time it connects to the server.

The attribute list will contain a key-value pair for each of the attributes with an Attribute Handle being the key and the Attribute Type (UUID) being the value.

If the server would like to support changes in the attribute handles (e.g. due to a firmware update or factory reset), then it must include the Service Changed characteristic to notify the client that an attribute handle has changed, which in turn triggers a service discovery.

Here’s a look at what the discovery process looks like:

As you can see, this usually requires multiple packets especially if there are many defined services and characteristics on the server-side.

The client keeps requesting to read the Attributes until it receives “Attribute Not Found” error message which indicates the end of the discovery process:

Another request that usually gets sent by the client (especially in applications that have a UI element) is reading the Device Name.

This is a simple Read Request GATT operation:

Take your BLE knowledge to the next level!

If you’re looking to learn more about the details of other BLE Events and packets, then check out the Bluetooth Developer Academy. Not only do I cover other BLE packets, but I also provide sample Ellisys capture files that you can download and view on your computer without the sniffer itself (only the sniffer software needed).

In the dedicated course, I cover the following additional BLE packets: