An overview of Bluetooth Beacons – Part 1 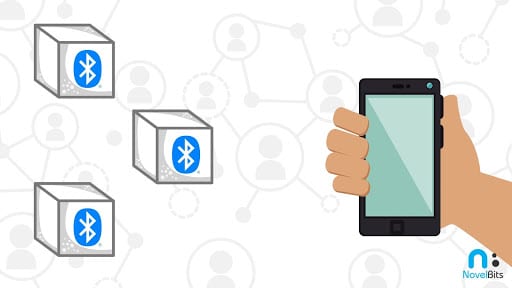 For many of us, our first encounters with Bluetooth probably came in the form of wireless headsets and hands-free devices. However, a new breed of Bluetooth devices is emerging — they are lower in cost and they consume less power.

BLE however, transmits data at a regular interval, consumes less power and as a result, can last for several months (sometimes up to years) on a single battery. This longevity is one of the reasons why it’s called low energy.

What exactly are Bluetooth beacons?

It doesn’t require an Internet connection and acts as a broadcaster within a short-range radius. The receiving device, such as a BLE-enabled smartphone, often acts as an intermediary device that uses the information from the beacon to do something with it.

The transmission distance sits around 10–30 meters for interior spaces and the hardware is highly cost-effective and low maintenance. This is because each Bluetooth beacon consists of only a small microprocessor, a radio, and a battery.

Bluetooth beacons enable the connection between the physical and digital world by creating a communication bridge between enabled devices and the person carrying them.

In doing so, Bluetooth beacons allow businesses to automate certain processes and enhance experience-based actions and interactions. Bluetooth beacons are part of the Internet of Things (IoT), which is the connection between different devices and machines to collect and transfer data without human-to-human or human-to-computer relationships.

The original Bluetooth technology was originally created by Dr. Nils Rydebeck and Dr. Johan Ullman in 1989.

Since then, Bluetooth has gone through many iterations to include more features, increased speed and bandwidth. Versions 2.0 and 3.0 required a two-way connection to work — meaning that devices are required to actively connect up with one another through pairing.

In 2010, Bluetooth 4.0 (Low Energy) was released and allowed for one way communication. This meant that devices could be configured to only transmit and isn’t required to listen, thus reducing power consumption significantly in the process.

On June 10th, 2013, Apple introduced iBeacon as part of iOS 7 at the World Wide Developer Conference (WWDC 2013). iBeacon is a protocol standard that enables mobile apps to listen for signals from beacons in the physical world and respond accordingly.

This led to the growth and adoption of Bluetooth beacon technology. By 2014, over 50 of the top 100 US retailers began to test beacon technology in their shops for contextual advertising and behavioral data gathering.

Around this time, Google also launched the Physical Web, which is a Chrome browser-based beacon scanner. The idea behind this is that unlike iBeacon, which required an app, Google’s Physical Web will allow a user through Google’s Chrome web browser to accept the URL and see the web pages with the associated spaces. However, it should be noted that Physical Web has now been discontinued and is no longer supported since 2018.

In 2016, Google announced the Eddystone-EID standard, which is similar to Apple’s iBeacon protocol, but with an additional extension to WiFi connected devices.

Due to the low cost of hardware production and size, AWS used beacons embedded attendee badges at their 2019 re:Invent event at Las Vegas to anonymously track foot traffic and attendance.

How do Bluetooth beacons work?

A Bluetooth beacon has a theoretical maximum radius distance of less than 100m. It can also have up to 6ms latency from a non-connected state. The actual range and response time depends on the beacon itself and what process it has been programmed to do.

BLE is mostly used in short-range applications (using the standard 1M PHY). Most Bluetooth beacons can reliably transmit up to approximately 30 meters without any physical obstructions. A typical operating range is around 2 to 5 meters, depending on the transmit power. The higher the range, the higher the battery consumption.

In the case of smart devices like a phone, the acceptance of a BLE broadcasting signal is often enabled through an app that allows for an automated connection to occur.

The advantages and disadvantages of Bluetooth beacons

One of the major advantages of Bluetooth beacons is that they are cheap and easy to install. It is a physical device that can either be fixed or move with objects or people to help track their location. It is essentially a transmitter that you just have to install, and all that’s left to do is configure the actions that the beacon is supposed to perform.

In addition to low cost, the ongoing maintenance required is also minimal due to the long battery life.

While the beacons don’t listen for a response, the receiving device can perform actions based on the beacon’s instructions. This includes, and is not limited to, things like check-ins on social media, location-based actions, push notifications or sending data via the user’s Internet connection.

A disadvantage of Bluetooth beacons is that they don’t work by themselves. A beacon is one part of a system, meaning that the entire setup relies on users carrying a compatible device (in most cases).

Bluetooth beacon triggers can also be limited by the quality of the receiving device’s connection to the Internet. Sometimes, a roadblock can be as simple as a user needing to accept consent requirements when automatically logging into Wi-Fi hotspots first.

On the flip side, when you also have control over the receiving device, your end-to-end implementation of BLE can ensure a certain level of reliability and low maintenance. Due to the low power consumption, a Bluetooth beacon can last up to 3 years without a battery replacement.

Bluetooth is often used as a term that can refer to both Bluetooth Classic and Bluetooth Low Energy. However, they are two very different protocols that both use the Bluetooth brand name. The difference is in the protocol specifics, how they are used, and the applications they are used in.

When it comes to Bluetooth beacons, BLE is the protocol employed. It should be noted that Bluetooth beacons are only one part of a bigger puzzle. There are two major standards that govern the way beacons and devices communicate — something which will be covered in the second part of this series, in addition to real-life use cases.

On its own, a Bluetooth beacon is simply a broadcaster, transmitting data within a configured radius. It should be noted that the bigger the radius, the higher the power consumption.

Take your BLE knowledge to the next level

If you’re interested in learning more about beacons including an upcoming course on developing Bluetooth beacons, then check out the Bluetooth Developer Academy.